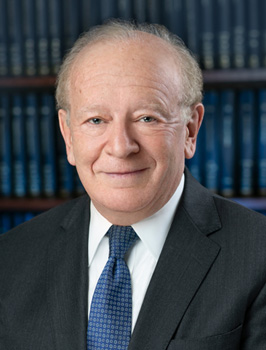 David S.J. Neufeld is one of the founding partners of Neufeld, O’Leary & Giusto and a recipient of the nationally recognized AV Preeminent Peer Review rating based on his legal ability and ethical standards.

David has represented individuals, groups and corporate parties in federal and state trial and appellate courts, administrative proceedings and before legislative bodies. In addition to his active practice in commercial disputes, estate matters, land use and insurance coverage issues, David has often been involved in unusual and interesting matters, many of which have established precedents for other cases. These include successful results in an international extradition proceeding, representing professional athletes in disputes with the National Football League as well as insurance carriers and professional teams, challenges to forfeiture statutes that deprived a business of its assets, challenging the imposition of a tax by a co-op board, defending a law firm against claims by a foreign government, challenging the dischargeability of claims by a bankrupt, and representing the rights of West Point cadets.

As a committed advocate, David strives to identify and address legal issues in order to efficiently achieve a successful result that is timely, economically reasonable, and beneficial to clients. When necessary, he has tried cases in state and federal courts before Judges and Juries to ensure that the rights of his clients are protected and enforced and has argued appeals.

David serves as counsel and advisor to businesses and business owners, including, providing them with guidance in efficiently complying with legal requirements, addressing regulatory matters before the legislature, and minimizing and avoiding their legal entanglements and expenses. As a trustee of several active and complex trusts, and the executor of estates, David applies his experience and legal background to efficiently achieving the objectives of the estates and trusts, and carrying out his fiduciary duties to the beneficiaries.

Early in his career, David had the honor of serving as the chairman of the New York State Bar Association’s Committee on Civil Practice for six years. He also served as chairman of the Zoning Board of Appeals of a New York municipality for over eleven years, and continues to serve on the Board each month.

As a young boy David’s family moved to the United States from South Africa, and he resides with his wife in New York having raised two wonderful sons. David obtained his law degree in 1974, with honors, from Case Western Reserve University, and is admitted to practice law in the New York State Courts, the United States Supreme Court, the U.S. Tax Court and several other federal courts in New York. At the request of his clients, David has also been admitted to appear before other federal and state courts including those in Kentucky, California, Maryland, Illinois, Florida and Washington. David is a member of the New York State and Suffolk County Bar Associations.

Get to Know the Rest of Our Team