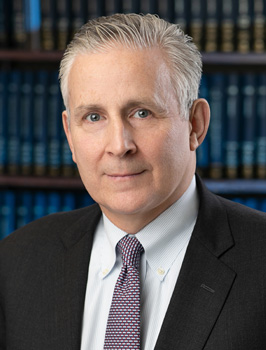 Denis O’Leary is a founding and managing partner of Neufeld, O’Leary & Giusto. Since his admission to the New York State Bar in 1986, Denis has been involved in a wide array of matters,

including complex commercial litigation, environmental litigation, commercial and residential real estate transactions and administration of and litigation involving both large and small estates. His areas of practice also include sports and entertainment law, as well as corporate matters, including business formation and organization. Denis was recently selected to participate in a series of articles highlighting various aspects of the real estate business organized by the “Long Island For Sale” brokerage.

Denis’ diverse clientele include professional athletes, shopping centers, hotels, co-op boards, civic groups and other not-for-profit organizations, including an organization which provides financial assistance for the education of the spouses and children of tri-state area police officers and NYC fire fighters who die in the line of duty. He has argued appeals, negotiated endorsement, television and movie contracts and represented owners of commercial buildings in New York City, Long Island and Rockland County.

The son of a retired New York City Police Officer, Denis graduated, cum laude, from Le Moyne College in Syracuse in 1982 with a Bachelor of Arts degree and from Hofstra University School of Law with a Juris Doctor degree, with distinction, in 1985. He is admitted to practice in New York and New Jersey, in the Second Circuit Court of Appeals, in the Eastern and Southern Districts of New York and the District of New Jersey and in the U.S. Tax Court. He has also been admitted pro hac vice in a number of jurisdictions when necessary to service the needs of the Firm’s clients.

Get to Know the Rest of Our Team